“Why for you rubbin' your eyes? Do I dazzle so much?”
―Alison to Jenkin

Alison Sedge was an English fieldmouse girl who lived in Fennywolde. Her good looks made her popular with the boys, and she reveled in their attention.

Alison was once good friends with Jenkin Nettle, and the two secretly considered a possible romance in the future. However, their relationship quickly soured when she received her mousebrass, the Sign of Grace and Beauty. It went straight to her head, making her vain and haughty. She began teasing all the boy mice of Fennywolde and took great care of her appearance. Deep down, though, she still truly loved Jenkin.

When Audrey Brown came to Fennywolde, Alison became very jealous because Jenkin seemed to take a liking to her. Out of spite, Alison informed Isaac Nettle about the corn dolly Audrey was making to decorate the Hall of Corn. Isaac, a staunch Green Mouser, then lashed out in fury at the newcomer, deeming her creation to be pagan idolatry. His condemnation of Audrey would cast doubt in the minds of almost all the mice in Fennywolde, to the point where they falsely believed she was a witch.

After Jenkin had been killed by Mahooot the owl, Alison blamed Audrey for what had happened. Even after she had realized that the spirit of Jupiter was behind everything, she still hated Audrey. At the end of that summer after Audrey and Arthur left, Alison found Madame Akkikuyu's charred crystal ball. Out of her head with grief at the time, she could not remember the significance of it and, cursing Audrey, she threw it in the ditch where it smashed on the rocks. Unwittingly she had released the spirit of Jupiter who had been trapped within the crystal.

Slowly, Alison began to lose her mind and stopped taking care of herself, to the point of looking more like the scruffiest of rats than a mouse. Her appearance became so frightful that some even considered her to be a witch. Alison's hatred for Audrey continued to grow, long after the town mouse had left Fennywolde. Ten years after the fall of Jupiter, the traveling artist Gervase Brightkin visited the field and had a frightening encounter with the mad Alison. She warned him "Ten years has the one who robbed my Love sat upon the Living Throne, but soon her reign will end and she will know more loss than poor mad Alison." Gervase was shaken and wondered if he should tell Audrey, who was then the Starwife in Greenwich.

When the strange black squirrel Morella (who would ultimately usurp Audrey) arrived in Greenwich, it was noted that she looked very much like the young Alison. The suspicion of Alison having become a witch, her dire warning of Audrey's impending downfall, and the strong implication that Morella is someone or something merely taking on the form of a black squirrel would seem to indicate a connection between the two. However, it is known that they, in fact, are not one and the same. Morella's physical appearance was chosen simply to mess with Audrey's head.[1]

Jenkin was the love of Alison's life, though they grew apart when she was given her mousebrass, the Sign of Grace and Beauty. She had become vain and flirted with all the boy fieldmice, teasing Jenkin whenever she saw him.

Alison felt threatened when Audrey Brown arrived in Fennywolde, for she could see the growing affection Jenkin had for the town mouse. As a result, Alison despised Audrey, fearing that she was a witch who was using her evil powers to seduce Jenkin, though this couldn't have been further from the truth. Jenkin did propose to Audrey, but she turned him down and recommended that he and Alison get back together as they were meant to be.

However, that same night Jenkin was caught by Mahooot the owl and killed. Alison blamed Audrey for this because she was with him at the time. The death of Jenkin affected Alison deeply, for deep down she truly loved him and regretted her mean treatment of him. With him dead, she knew she would never marry.

Gradually, Alison began to lose her sanity, living in a fantasy world where she and Jenkin were happy together.

Alison hated Audrey from the moment she laid eyes on her. She envied her looks and fancy attire, and became jealous when her former boyfriend Jenkin developed a crush on the newcomer. When several of her suitors ended up strangled, Alison suspected that Audrey was the culprit because the latter had boasted to her previously (in jest) that if a snake threatened her, she'd "choke it with [her] bare paws just for the fun of it". In reality, it was Audrey's corn dolly (animated by the power of Jupiter) doing the killings, but this would not be revealed for some time.

One night, Jenkin met Audrey secretly to propose marriage to her (though she turned him down and instead suggested he return to Alison). The two of them ended up being chased through the field by the evil corn dolly, and just when it seemed they were out of harm's way, Mahooot the owl swooped down and carried Jenkin off to eat him. When Alison learned of this, she threw her mousebrass away in grief. She blamed Audrey for Jenkin's death as well. 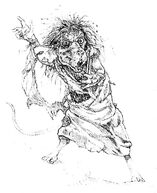 Alison having gone mad
Add a photo to this gallery

Retrieved from "https://deptfordmice.fandom.com/wiki/Alison_Sedge?oldid=8167"
Community content is available under CC-BY-SA unless otherwise noted.