To win the Fennywolde Games

Dimsel Bottom was a fieldmouse girl of Fennywolde and the sister of Figgy Bottom. She had a minor role in The Crystal Prison, and was a major antagonist (of the non-evil variety) in Whortle's Hope.

Role in The Crystal Prison Edit

Dimsel was first mentioned by Alison Sedge as the latter was boasting about herself while alone. In a tone of mock pity, she whispered that Dimsel had a face like a cow's behind and a wit to match.

Visiting town mouse Audrey Brown encountered Dimsel and her friends Iris Crowfoot and Lily Clover as they were gathering moss to line nests with. They had a friendly chat and Lily blurted out that Dimsel had a crush on Audrey's brother Arthur, much to her embarrassment. Audrey was amused and wished Dimsel the best concerning her brother.

When Audrey met Alison, the latter mentioned Dimsel being attracted to Arthur, and then remarked cruelly that neither was a catch.

Dimsel was seen sidling up to Arthur and then dancing with him during Midsummers' Eve.

In the end, when Arthur and Audrey left Fennywolde, Dimsel stared after the former sorrowfully.

During the previous summer, Dimsel was very unpleasant and downright nasty. She constantly tormented Young Whortle Nep and his friends, mocking them and their club the Wolf Killers. When she heard Whortle was planning on entering the Fennywolde Games, she scoffed and informed him that she was also and he hadn't a chance against her. Dimsel was tomboyish and athletic, so it seemed she may have been right.

Whortle and his friends made a raft for the game, only for it to be stolen and hidden by Dimsel. The girls worked together to make a hideout of their own from an old abandoned burrow beneath one of the great oaks beyond the meadow. At one point, Iris came crying hysterically to Whortle and explained that a monster had gotten Dimsel. The boys initially doubted her but she was so frightened that they could not fail to believe it. They found Dimsel cornered in the new den the girls had made, shouting taunts at the 'monster' that was in fact a wolf. Whortle and his friends managed to defeat it, only to realise that it was Todkin's drawing brought to life by the magic of the three watervoles who befriended Whortle. They wanted to give he and the other Wolf Killers the opportunity to live up to their name.

The games began and much to the dismay of Whortle and his friends (who had, unbeknownst to him, been trying to give him the upper paw through cheating), Dimsel was ahead of him. For the raft race, she made a great show of marching out dressed as 'The Savage Goddess', which was the theme of her raft. Isaac Nettle was appalled by her apparent blasphemy, and warned her that the Green would punish her if she didn't repent. She only scoffed and disrespected him, much to the shock of all watching.

It was clear that Dimsel had a better raft than anyone else, complete with spikes that could ram into the crafts of the other entrants. Knowing that Whortle didn't stand a chance, Samuel Gorse made the difficult decision to give Dimsel the magical biscuit he had received from the watervoles that was to help him put on weight.

The race started out in Dimsel's favour, as she destroyed the rafts of others and hurled hateful insults at them. She even stole Twit's paddle when Jenkin grabbed hers and tossed it to the shore in a fit of anger. But then, as Dimsel was almost at the finish line, Samuel's biscuit started to take effect. To her dismay and horror, Dimsel began to rapidly gain weight, to the point where her raft was capsized and she was pitched into the water.

Noticing the struggling Dimsel, Whortle towed her to the shore. She was now so huge that it was impossible for her to move. The fieldmice gathered about her in wonder, believing it to be divine punishment from the Green Mouse, as Isaac Nettle had previously said that the weight of His wrath would come down on her. Only Figgy, Todkin, Hodge, and Samuel knew that it was the biscuit that did it. Alison Sedge was in her glory taunting her rival. "You ain't fat, Dimsel - you're gigantic", she said in mock pity while patting her head, before capering off to find Jenkin.

An oversized domed nest had to be built for Dimsel on the ground, as she was too large to fit in a regular one. 'The Savage Goddess' raft was recovered from the water and, after the spikes were removed, wheels were fitted onto it. Five burly fieldmice lifted Dimsel onto it and trawled her to the Hall of Corn.

The Bottom family assured Dimsel that they would be close by if she needed anything... so long as it's not a pie, her mother remarked. This caused Dimsel to start weeping and her grandmother, with her usual lack of tact, said that even her tears were fat.

Later, during the Slingshot competition, one of the final challenges in the Fennywolde Games, Young Whortle decided to intentionally miss the target so Jenkin could win. The stone he slung went flying and a piercing howl was heard from the Hall of Corn. It was Dimsel, with Whortle having successfully hit her on the bottom. But it was noted that since it was currently such a large area it was really no great feat.

Dimsel's colossal weight took over a year to shed, and she never again doubted the existence of the Green. She became a much kinder mouse maiden as a result of her ordeal. 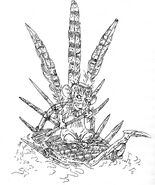 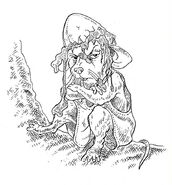 Add a photo to this gallery
Retrieved from "https://deptfordmice.fandom.com/wiki/Dimsel_Bottom?oldid=8131"
Community content is available under CC-BY-SA unless otherwise noted.