“The respectable profession of travelling illuminator and recorder of likenesses is one in which I have been engaged for many years and in that time I have journeyed to many diverse lands.”
―Gervase describing himself

Gervase Archibald Brightkin was a red squirrel artist and writer. He came to Greenwich Park ten years after the fall of Jupiter, and was charged by the Starwife, Audrey Scuttle, to write an almanack detailing all the traditions and lore of the mice, squirrels, bats and rats.

Throughout the year, he traveled to Fennywolde and Holeborn to ask William "Twit" Scuttle and Arthur Brown to tell their stories. He also looked through the Starwife's archive chamber to find information to include in his work. 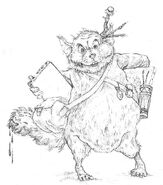 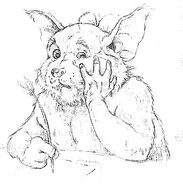 Add a photo to this gallery
Retrieved from "https://deptfordmice.fandom.com/wiki/Gervase_Archibald_Brightkin?oldid=7114"
Community content is available under CC-BY-SA unless otherwise noted.