The Deptford Mice Wiki
Register
Don't have an account?
Sign In
Advertisement
in: Stubs, Mice, Protagonists,
and 6 more

King of the Field

Becomes the King of the Field in Fennywolde

“You're not as cheeseless as folk make out, William Scuttle. You're a very wise mouse indeed.”
―Audrey

William "Twit" Scuttle was an English fieldmouse, the cousin of Oswald Chitter. His mother is Gladwin Scuttle, whose sister is Arabel Chitter.

Twit is a best friend of Thomas Triton, and enjoys his rum. He is also known to be a simpleton- "no cheese upstairs". However, this is not a bad thing, as he sees good in everyone.

In The Crystal Prison, Twit accompanies Audrey Brown to the Fennywolde field to return to his family at last. After a frightening series of murders provokes the mice of Fenny to attempt to hang Audrey, Twit invokes the Gallows Law and proceeds to marry her. At first she believes the act was simply to save her neck; but at the end of the book, when Audrey and Arthur return to their home, it is shown that Twit truly loves her.

Twit's importance in the fate of the world cannot be underestimated. Together with Ogmund he will be instrumental in destroying one of the most ancient and powerful beings upon the earth. 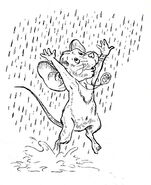 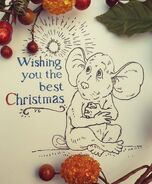 Illustration by John Shelley
Community content is available under CC-BY-SA unless otherwise noted.