Woodj
Worm (by the sea maidens)
Titch (by Jophet)

Is rescued by Zenna, loses his memory, and becomes the new Holy One of Hara

“So, fieldmouse, unto you the Irish nomad entrusted the terrible burden. A curious choice, yet Mulligan and his line were no less curious.”
―The Holy One to Woodget

Woodget Pipple was a fieldmouse of Betony Bank. He was the best friend of Thomas Triton.

Woodget was very small, with large ears and whiskers that twitched constantly. He wore a blue woolen cap which would later become a cherished memento worn by Thomas in memory of his lost friend. Apparently Woodget also had a noticeable blue vein on his nose, which in sea lore is a sign of a mouse doomed to die by drowning.[1]

After a misunderstanding, he left Betony Bank and Thomas followed him to the ship harbour where they both were tricked by the Irish mouse Mulligan into boarding the Calliope. This was the start of a journey that would lead them to Crete, India and finally Singapore, in an attempt to prevent the serpent god Sarpedon from being released upon the world.

In the end, they were successful, but as they were about to board a ship that would take them home, Thomas was put into a trance by Mother Lotus, one of the surviving followers of Sarpedon. Without realising what he was doing, he threw Woodget into the water to drown. Hours later, Thomas stirred from the enchantment and then to his horror, remembered what he had done. Thinking that he killed his friend, the event would haunt him for years afterward.

Unbeknownst to Thomas however, Woodget was rescued by Zenna the sea maiden, and brought back to the City of Hara in India. With no memory of who he was, Woodget became the new Holy One. At some point he made seven boxwood carvings which he gave to the Norwegian mariner mouse Snorri, who then traded them to Kempe. During a visit to the sadhu with her grandson, Sobhan Giri desired to reveal his true identity to him, but he replied that he was content to know nothing of his past. 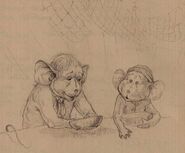 Add a photo to this gallery
Retrieved from "https://deptfordmice.fandom.com/wiki/Woodget_Pipple?oldid=7910"
Community content is available under CC-BY-SA unless otherwise noted.